In 2020, the Worcester Business Journal Manufacturing Excellence Award winners “have found ways to not only survive the economic fallout from the coronavirus pandemic, but to provide new products and services to the particular needs the pandemic is creating.”

Neles of Shrewsberry, MA was awarded the Collaboration in Manufacturing Award thanks in part to their innovative Valve Technology Center.

Hunt Valve Company announces that Charles Ferrer has been promoted to president & CEO. Brad Sterner, CEO since 2015, maintains the title of executive chairman and remains a member of the board of directors of Hunt Valve.

Since joining Hunt Valve in early 2017, Ferrer has progressed to increasing levels of senior management responsibility, as he and the HVC team have delivered breakthrough growth and profitability results during his time with the company. Hunt Valve has tripled revenue during Ferrer’s tenure, and he has led the successful integration of three transformative acquisitions. Ferrer joined Hunt Valve from GE Aviation and previously served in the U.S. Marine Corps as an F/A-18 pilot.

Velan has been recently awarded important contracts for the supply of multiple packages of actuated and manual valves to MODEC Offshore Production Systems (Singapore) Pte. Ltd. These orders are added to those already acquired in the last 12 months for sales in excess of $30 million.

The scope of supply consists of high and ultra-high pressure forged valves whose compact design and special construction have significantly contributed to the improvement of the customer’s process efficiency and will also improve and facilitate the daily operation of the customer’s facilities. Deliveries are scheduled for end of 2020 to early/mid-2021 (Q1 to Q2 FY22). 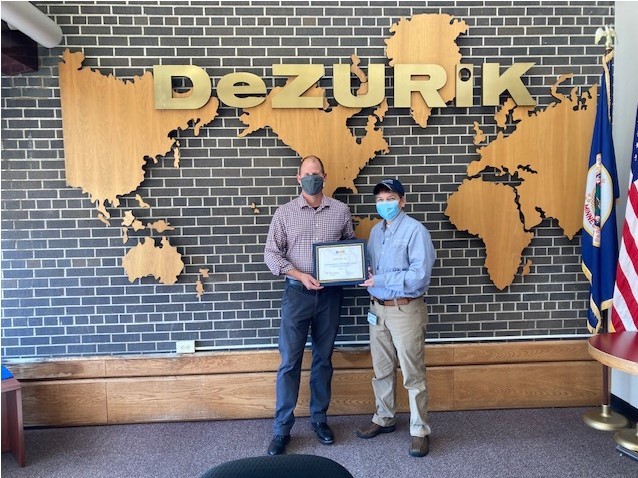 DeZURIK was recognized for excellence in workplace safety and health during the MN/SD Safety & Health Virtual Conference on October 19-20. DeZURIK is one of 262 employers to be honored through the awards program, coordinated by the Minnesota Safety Council.

Since 1934, the annual Governor’s Safety Awards program has honored Minnesota employers with exceptional safety performance. Applicants are judged on several years of injury data as it compares with their industry’s national statistics, and on their progress in implementing a comprehensive safety program.

DeZURIK’s award recognizes continuing improvement and/or a continuing outstanding record with incident rates that are 51%-90% better than the industry average, and a score between 75 and 90 on the safety program evaluation scale.

Velan Inc. announced that James Mannebach has been appointed chairman of the board. The outgoing chairman, Tom Velan, will continue to serve as a director of the company. Mannebach, who joined the board in 2018, is the first independent chairman of the company. He has extensive experience in the valve and flow control industry having worked in senior leadership positions at Emerson Process Management (Xomox, Fisher Controls, Micro Motion and Rosemont), Roper Technologies and IMI.

Rob Velan has been appointed vice-chairman of the board as the Velan family continues to move from the second-generation leadership to third-generation and independent leadership. Rob Velan has served on the board since 2013 and is the executive vice-president of MRO and Aftermarket, one of the company’s strategic business units.

*to qualified valve professionals in the U.S./Canada